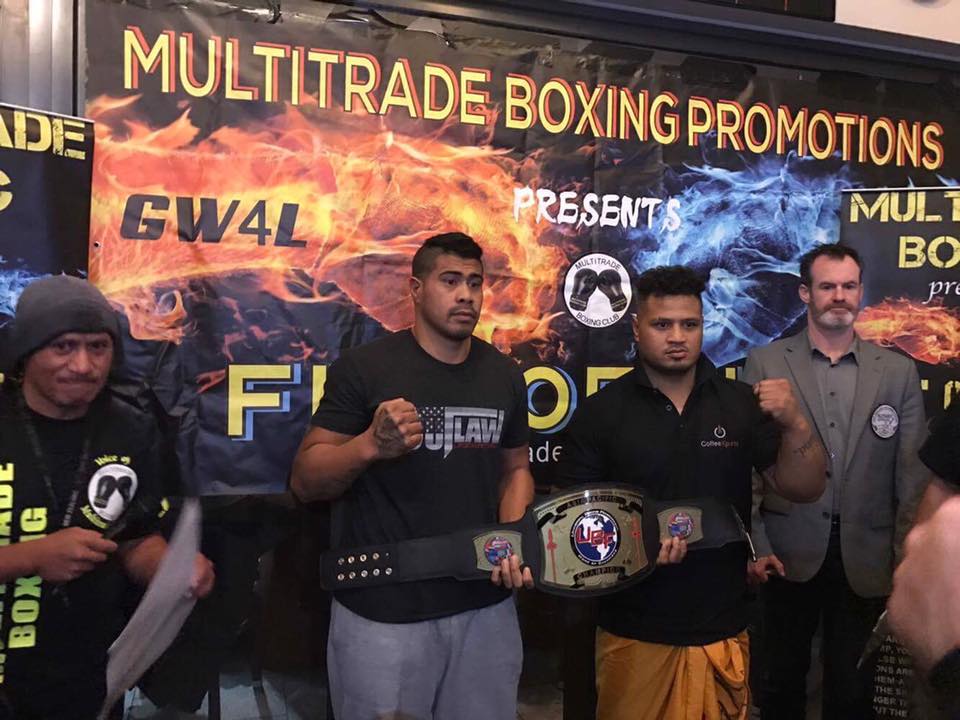 Junior Pati has won his first title since debuting in 2004. Pati went the 8 round distance against Lui Te’o who took the fight on two days notice, to win the vacant UBF Asia Pacific Heavyweight Title.

There was a lot of controversy leading into the fight with the main event, as the original bout was scheduled for Junior Pati to take on Lance Bryant for the NZNBF and vacant UBF Asia Pacific Cruiserweight titles. When the fight was originally scheduled a few months before fight night, NZNBF Champion Lance Bryant and his team stated that they would not take the fight if Pati did not make weight.

One week before weigh in, promoters Mal and Raylyne Siaosi of Multitrade Boxing set up a live weigh in for people to see the progress of Pati’s weight. After arriving fashionably late, Pati arrived and weigh in at 96 kgs. After a few days of heavy training, Pati got sick from extreme exhaustion. Due to rest, Pati gain weight back into 100 kgs. Promoters made a decision to cancel the fight 2 days before the fight, knowing that Pati could not make weight. Bryant’s manager Michael Meehan, stated on facebook that they would have taken a catchweight fight, however the fight was called off but Lance Bryant will get paid his full purse. Lui Te’o was called in on two days notice to take on Junior Pati in the main event for now the change vacant UBF Asia Pacific Heavyweight title.

The first pro bout of the night was Evander Tia (0-1-0) taking on Peter Tovi’o (2-26-1) in a cruiserweight bout. Tia won the bout by TKO with 1 second left in the first round. Tovi’o debuted in Australia in 2002. After four fights in 2002, Tovi’o returned to the ring in 2009 and was active ever since. Tovi’o announced his retirement after a 15 year career.

American James Wilson (MMA 5-3-0 Kickboxing 16-2-1 Boxing 1-0-0) fought in his second professional boxing bout against Joe Betham (0-4-0). The bout went late into the fight, with Betham retiring before the 4th round.

Son of the promoter Skope Siaosi made his debut pro bout against Fiji Born Aafeen Deen, who also made his pro debut. The bout was one of the best of the night with both fighters throwing hard shots. Skope won the bout by Unanimous Decision. Skope stated after the bout that Deen was the hardest puncher he’s ever fought.
Jerome Pascua (2-1-0) took on Rob Ramsey (0-1-0) in a middleweight contest. Ramsey made the bout difficult for Pascua as it went the full distance. Pascua won the bout by unanimous decision.

In the main event Junior Pati took on Lui Te’o for the UBF Asia Pacific Heavyweight Title. It was an amazing fight and allot closer than people think. Earlier in the bout Te’o was low blowed. A little bit late Te’o was knocked down from a borderline body shot which could be a low blow. Pati got a point deducted in the fourth round. Te’o got knocked down again in the 7th round by a sucker punch after the break. The rounds were very close and the fight got quite dirty at times. Junior Pati won the bout by Unanimous Decision winning his first title of his career.